You Are Here: Home → How to File a Texas Property Tax Protest—And Why You Must 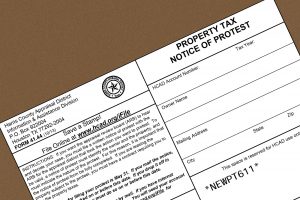 Do you want immediate property tax relief? This year? Now?

The Watchdog has a plan. This doesn’t depend on the Texas Legislature to help us (it’s looking like it won’t). Local governments and school districts, as much as they might wish, can’t stop this either.

My idea is both legal and ethical. It’s easy for you to do. But it only works if enough of us jump in at the same time.

The 2017 plan is called “Everybody File a Protest.”

The gist is this: Usually in the Dallas-Fort Worth region, only 1 in 7 property owners file a tax protest with their county appraisal district. It’s so easy to do, especially now that an owner can do it online before the May 31 deadline.

The system is set up so all protests should be resolved by July 20. As one property tax consultant explained to me, from the May 31 protest deadline to July 20 leaves only 35 business days to handle thousands of protests.

If two, three or four times more owners file a protest than in the past, appraisal districts will be overwhelmed with workloads like never before. There’s nothing wrong with this. It’s your legal right as a Texan to file a protest every year, even if your taxes don’t go up, and even if your school taxes are frozen because you’re a senior or disabled.

Sure, appraisal districts in large counties of a million or more people can ask for an extension, but that would create problems for all the cities, counties, school districts, public colleges and hospitals that are waiting. These local governments take the final taxable values from the appraisal district and figure out how much they can extract from us before we start tossing tea over the side of the boat.

These governments need to know as soon as possible how much tax money they will have for the coming year. They really can’t wait.

So what happens? After many years of poking and prodding the system to see what works, The Watchdog believes that appraisal districts will be under tremendous pressure to mass settle the increased number of protests.

That’s how some property tax consultants for hire hope to do it. If one tax consultant comes in representing 300 protesting owners, the district isn’t going to hold 300 hearings. From what I’ve seen, a district is likely to wave a magic wand and give the consultant an overall decrease for most or sometimes everyone on the consultant’s list. Make it go away.

That’s what happened to me last year. I didn’t think it was fair. But hiring a consultant worked. My appraised value was lowered considerably without a hearing and without having to present any evidence.

Is my plan foolproof?

Well, under the normal protest load, one consultant told me that he estimates an appraiser must handle one case every 12 minutes during the protest period. I believe you’ll see a lot of “splitting the difference” in deal-making. A homeowner says her or his property is worth one number. An appraiser says another. They split down the middle.

This “Everybody File a Protest” plan will not be looked upon kindly by county appraisal districts. It will stress local governments who would see a decline in tax dollars as more people win more savings in more protests. But if you follow The Watchdog on this battle plan, you’re not doing anything wrong. There are no repercussions to a homeowner who protests.

The Texas Property Taxpayers’ Bill of Rights (yes, there is one) states, “You have the right to protest your property’s value.”

Don’t wait until the May 31 deadline because if you need a computer PIN, that may take extra time. To get this going, inform the district now that you’re protesting.

You can hire a property tax consultant, but you don’t need to. If you do, consider hiring one who only takes a fee if your tax value gets lowered. Don’t pay a flat fee for failure. (Check the Texas Association of Property Tax Professionals (taptp.org) website to start. You can watch instructional videos on the state comptroller’s website, too.

Here’s a cool part of my plan: If you don’t want to go to an actual hearing, you don’t have to. Sit tight and wait for the appraisal district to offer a settlement to avoid a hearing. You can also cancel a hearing at the last moment.

The system is unfair, and this is a way to take a proper stand.

The system is unfair because sale prices are not public so the numbers are often guesses, not true reflections of the market.

The system is unfair because those who hire a consultant may have an advantage over those who don’t.

The system is unfair because state law places a 10 percent growth cap each year on taxable value. So what happens? Many properties jump the allowed 10 percent year after year. Did you get a 10 percent raise at work?

The system is unfair because businesses often don’t pay their fair share.

The system is unfair because the wealthiest homes are often undervalued for tax purposes when compared to their true worth.

The system is unfair because appraisers don’t go into your house and see what’s actually going on.

Here are videos that teach the ins and outs of a property tax protest.

In this 2014 video, The Watchdog shows one method he uses to appeal.

Property tax statements are mailed out by May 1.

Taxes are due by next January, in most cases. But the protest deadline is May 31.

Any homeowner or property owner can protest, even if their taxes did not go up.

Seniors have their school taxes frozen, but in most cases their remaining property taxes are not.

The appraisal district assigns two key numbers for a property each year. The taxable value is used to pay taxes. The market value is what the house might sell for. Local governments take the taxable value and multiply it by their own tax rate to come up with your annual tax bill.

You can’t afford to miss The Watchdog. Follow our latest reporting always at The Watchdog page.