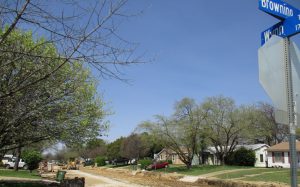 Sections of 33 aging streets in Arlington are being rebuilt as part of the 2014 Residential Rebuild project.In order to rebuild the greatest amount of roads in the shortest time possible, this $21.7 million dollar project has been split into four phases. Each phase includes rebuilding the streets with concrete and water and sanitary sewer line improvements. The work will also address ponding issues, or water accumulating in low spots on roads after rain, on various streets.Phase 1, which began construction in February 2016, includes Apache Street, Forrestal Drive, Kent Drive, Meadow Lane, Raton Ridge Lane, Tharp Street, Waggoner Drive, and Wynn Terrace. This $8.4 million dollar project is estimated to be complete in late April.

Construction on Phases 2, 3 and 4 are scheduled to begin in March and April of this year.Phase 2 is a $7.9 million dollar project to rebuild streets in three separate neighborhoods in east and west Arlington. This project includes select streets near Daniel Drive and Mayfield Road, California Lane and Medlin Drive, as well as near Browning Drive.

Phase 3 will address portions of Harmon Lane, Kelly Terrace, and Wynn Terrace in east Arlington and will cost an estimated $3.3 million.

Funding for these improvements were approved by the citizens of Arlington in the 2008 and 2014 Bond elections. These street rebuild projects align with the Arlington City Council priority to Enhance Regional Mobility.