You Are Here: Home → Fires tear through 3 structures in separate incidents in Dallas, Plano, Arlington 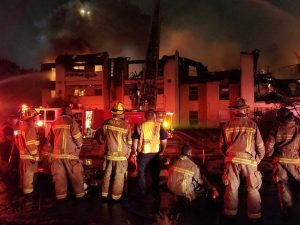 Three fires in the Dallas-Fort Worth area late Friday and early Saturday left occupants unhurt, but a Dallas firefighter was hospitalized for a minor injury, authorities said.

Area crews responded to fires at a vacant apartment complex in Dallas, a hotel in Plano and a duplex in Arlington.

A fire engulfed the third floor of a vacant apartment complex as firefighters arrived at 12363 Abrams Road around 9:30 p.m. Friday. The flames continued to spread after they reached the attic.

One firefighter was hospitalized for a minor injury, Fire-Rescue spokesman Jason Evans said. There were no other injuries reported.

About 70 to 80 firefighters worked to put the flames out. The cause is undetermined.

A hotel that was under construction caught on fire Friday night, but no injuries were reported.

Plano fire arrived about 9 p.m. to see heavy fire inside the building in the 8400 block of Parkwood Boulevard.

Fire crews were able to put the fire out in about 30 minutes.

The cause of the fire was under investigation.

A duplex in Arlington was on fire about midnight Saturday, but no injures were reported.

Residents had escaped when fire crews arrived to the 700 block of Greenridge Drive.

The cause of the fire was under investigation.