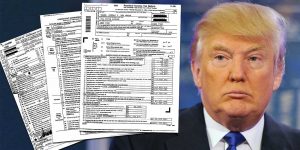 President Trump wrote off more than $100 million in business losses to reduce his federal taxes in 2005, according to forms made public on Tuesday night: a rare glimpse at documents that he had refused to disclose since becoming a candidate for the nation’s highest office.

Mr. Trump paid $38 million in federal income taxes on reported income of $150 million, an effective tax rate of 25 percent, according to forms disclosed on Rachel Maddow’s MSNBC show. By claiming losses, Mr. Trump apparently saved millions of dollars in taxes that he would otherwise have owed.

The White House responded without even waiting for the show to air, issuing a statement that seemed to confirm the authenticity of the forms even as it defended Mr. Trump and assailed MSNBC for publicizing them. “Before being elected president, Mr. Trump was one of the most successful businessmen in the world, with a responsibility to his company, his family and his employees to pay no more tax than legally required,” the statement said.

The White House described the business losses as a “large-scale depreciation for construction,” but did not elaborate. In addition to the federal income taxes in 2005, the statement said, he paid “tens of millions of dollars in other taxes, such as sales and excise taxes and employment taxes, and this illegally published return proves just that.”

Mr. Trump’s refusal to make his tax returns public during the campaign broke with decades of tradition in presidential contests and emerged as a central issue. That drumbeat has continued since he entered the White House, particularly from critics who contend that his returns may shed light on various aspects of his business practices, including whether he has done business with Russian companies and banks.

Nothing in the two pages produced on Tuesday night suggested any ties with Russia. Nor did they provide much information about his businesses that was not previously known. But they showed that the vast bulk of the federal income taxes he paid in 2005, $31 million, was paid under the alternative minimum tax, which Mr. Trump wants to abolish.

That tax serves as a backstop to the ordinary income tax and is intended to prevent wealthy Americans from paying no income tax at all. Without it, Mr. Trump would have paid about $5 million in regular taxes, plus nearly $2 million in self-employment taxes, on $153 million in income in 2005.

“Trump’s return shows that he’s pushing tax changes that benefit multimillionaire heirs like him, not the middle class,” said Lily Batchelder, a tax law professor at New York University and former majority chief tax counsel for the Senate Finance Committee. “His proposal to repeal the A.M.T. would have slashed his own tax burden by $31 million, and his income tax rate would be lower than the average rate paid by families earning $75,000 to $100,000.”

Edward Kleinbard, a professor of tax law at the University of Southern California, said, “It’s disturbing that he is pushing to eliminate the only tax that really bit him in that year.”

The White House castigated MSNBC for reporting on Mr. Trump’s taxes. “You know you are desperate for ratings when you are willing to violate the law to push a story about two pages of tax returns from over a decade ago,” its statement said. “The dishonest media can continue to make this part of their agenda, while the president will focus on his, which includes tax reform that will benefit all Americans.”

The president’s son Donald Trump Jr. suggested that the disclosure only demonstrated his father’s business acumen. “Thank you Rachel Maddow for proving to your #Trump hating followers how successful @realdonaldtrump is & that he paid $40mm in taxes!” he wrote on Twitter.

Democrats pounced on Tuesday night’s report, arguing that the White House’s decision to release details of Mr. Trump’s 2005 taxes before Ms. Maddow’s show undercut his past refusal to release any such information.

The tax forms were sent to David Cay Johnston, a former New York Times reporter who covered tax policy for years and has written a book on Mr. Trump. Appearing with Ms. Maddow, he said he had received the forms “over the transom” at his home and did not know who had sent them. He suggested that they might even have been sent by Mr. Trump himself. Because he did not solicit the forms, Mr. Johnston said it was not illegal to receive them.

The forms showed that Mr. Trump made $67 million in real estate royalties, $42 million in business income, $32 million in capital gains, $9 million in taxable interest and $998,599 in salary in 2005, for a total of nearly $153 million. After writing off $103 million, he reported adjusted gross income of nearly $49 million. In the end, he had to write a check for $2,450,597, including penalties and interest for late payment.

In October, The Times published three pages of Mr. Trump’s 1995 tax returns, which showed a $916 million deduction that could have allowed him to legally avoid paying federal income taxes for up to 18 years. The forms disclosed on Tuesday do not say whether the $103 million in losses were left over from that 1995 loss.

The 1995 deduction was derived from the financial wreckage of some of the companies Mr. Trump drove into bankruptcy years ago, including his Atlantic City casinos, and would have allowed him to cancel out taxable income for an 18-year period. A tax code provision benefiting real estate developers, which took effect in 1993, permitted businesses like Mr. Trump’s to take tax deductions for losing other people’s money.

However, it was unclear how much of a deduction Mr. Trump actually took. The I.R.S. has challenged such deductions, known as conservation easements, saying that taxpayers overstated the value of their transactions.

During the presidential campaign, Mr. Trump initially promised he would release his tax returns. “I have very big returns, as you know, and I have everything all approved and very beautiful, and we’ll be working that over in the next period of time,” he said in a January 2016 television interview. He then backpedaled, saying he would wait until the I.R.S. had completed its audit. In May 2016, tax lawyers for Mr. Trump released a letter saying that his personal returns had been “under continuous examination” by the I.R.S. since 2002, and that examinations of his returns from 2009 on were continuing.

The I.R.S. has not confirmed that Mr. Trump’s taxes are, in fact, under audit.

Few people outside Mr. Trump’s inner circle have seen his tax returns. One person who has is Timothy L. O’Brien, another former Times reporter, whom Mr. Trump sued for libel after Mr. O’Brien published a book that argued that Mr. Trump’s net worth was $150 million to $250 million, rather than several billion dollars, as Mr. Trump had claimed. The suit was ultimately dismissed.

Limited information about Mr. Trump’s tax returns from other years has surfaced in court and regulatory records. A 1981 report by New Jersey regulators assessing his fitness for a casino license stated that he had paid more than $71,000 in federal income taxes on about $218,000 of taxable income earned from 1975 to 1977.

But in the next two years, 1978 and 1979, Mr. Trump paid no federal income taxes. The New Jersey report explained that, by taking advantage of deductions available to real estate developers and claiming losses from partnerships, he was able to report a “negative income” of $406,379 in 1978 and $3.4 million in 1979 — thus avoiding any tax liability for those two years, a time when he claimed to be worth hundreds of millions of dollars.

Tax court records indicate that Mr. Trump also avoided paying federal income taxes in 1984. In 1991 and 1993, when his Atlantic City casinos were in deep financial trouble, casino commission reports show he claimed losses that would have allowed him to avoid paying income taxes in those years, too. Mr. Trump may have been able to use those losses to reduce or eliminate his federal tax bill for years to come.

During the presidential debate, Hillary Clinton suggested that Mr. Trump was refusing to release his tax returns to hide the fact that he did not pay federal income taxes. “That makes me smart,” Mr. Trump retorted during one debate.

In response to The Times’s disclosure that Mr. Trump could have used a $916 million tax loss to avoid paying years of federal income taxes, Mr. Trump and his surrogates said the revelation merely proved his “genius” at legally avoiding that burden.